Taylor and students from Venetia Elementary and Lee High School

My Hidden Figures Reflection
By: Breyonna Fox,
Blogging Intern with My Quest To Teach
Jacksonville, Florida

My first thought when I finished watching Hidden
Figures was, “Wow, they actually did all of those
things, like they accomplished their goals.” I thought
this was very inspirational, because back then it was
very hard for other races besides Caucasians to do
the things they wanted and love. In the movie there
is a part when Mary Jackson’s husband even doubts
her accomplishing her dreams, showing how many dreams
were simply crushed and forgotten.

Then there was Dorothy Vaughn who wanted to be
a supervisor for her group of women who are highly
skilled with computers. She wanted to move on with
her dreams when she realized Katherine and Mary
were moving up with theirs. NASA wouldn’t make
her a supervisor, though. She worked hard and even
acted like a supervisor to her group of woman. Then
one day she got a huge offer, but she would only do
it if her girls were with her as well. So they allowed it.
She finally became a supervisor. She is the first
African American woman to supervise a staff
at the West Area Computers Division. Another part
in the movie shows when she took her sons to the
library to get some books to help her out with work,
they ended up getting kicked out, just because
Dorothy needed the book, but the library was whites
only.

It was upsetting to see how she couldn’t check
out the book and then the security guard pushed
her sons out as well. Then when she got on the
bus she still had the book on her and when her
sons asked why and she said she pays taxes
and those taxes help the library out. I know
Dorothy is a very witty and strong person. She
stayed determined in what she believed in and
knew she could accomplish her goals, she didn’t
leave her girls and moved them up with her.

Mary Jackson wanted to become an engineer.
In the beginning, she had doubts about it. She
was talking about it with her co-worker and she
said how impossible it felt. Her co-workers told
her she could do it, because they were already
doing the impossible. I thought about what she
said and how she had hope that Mary could
accomplish her goals. It showed me even when
things feel impossible, they aren’t. She even
went to court to fight for what she wanted and
got night classes at University, an all-white
school! That was amazing. I really loved that part,
because that filled so much hope in Mary and
made her believe more in herself that she could
accomplish a lot more things after that, Mary
Jackson became the first female African-American
NASA engineer. Mary is a sassy, brave
and determined for what she fights for.
Last, but not least was Katherine Goble,
she was strongly skilled in mathematics and
had an analytical mind. She got a new assignment
by Al Harrison, so she had to move to a new
part of the company.

When she was getting escorted, the woman told her,
“you will be the first black person here. Don’t make
me regret choosing you. Most people only last a few
days, so don’t get used to it.” Then when Katherine
entered everyone stared at her. Her co-workers were
rude towards her as well. She went to grab some
coffee and everyone was staring at her. She
immediately felt uncomfortable and sat down and
sipped her coffee slowly. After that incident, hey
got a second coffee maker and it said “colored.”
She went to use it, but it was empty, sending a message.

This showed me how even though Katherine
accomplished her goals, there will always be people
trying to bring her down. Then she got upset and
explained to Harrison how rude everyone was acting
towards her and how she never got pearls and how
no one wants to use the same coffee maker as her,
since earlier she was always in the bathroom and he
would ask where she went. Then the next day he
tore down the “whites only” bathroom and the
“colored” signs and he said, “no whites or colored,
we’re all the same here.” That showed me how
Al Harrison really cared about Katherine as an
employee and he didn’t care about skin color.

Then when Katherine got engaged, her co-workers
got her a pearl necklace, which was Harrison’s ideas
too, which she wore to her wedding. Then later on in
the movie, when John Glenn was going to orbit
around Earth, he said he only trusted Katherine with
her calculations and with his safety. He knew she
was brilliant and he only trusted her not the computer
machine. He was right too, he had trouble up in space,
but he got back safe.

Katherine played a huge role in John Glenn’s journey
and Apollo space program landing a man on the moon.
In 2015, Katherine received National Medal of Freedom
from President Obama. 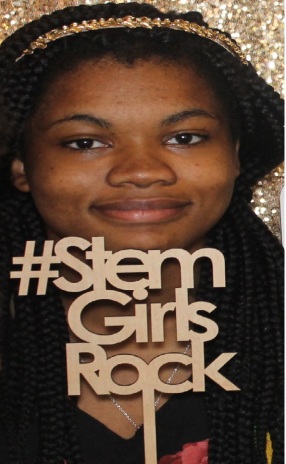 This movie showed me that anything you set your mind
to you can accomplish. You just have to stay determined
and full of courage. This movie is very inspiring and
does prove to other women and girls they can do things
even when they feel it’s out of their reach.
Edited by Prof. William Jackson  #MyQuestToTeach